Bounty Killer says politics is to be blamed for Bob Marley getting shot decades ago and not dancehall music.

Bounty Killer is re-igniting the argument that there is no connection between crime and dancehall as he shares a very vocal clip of himself from more than 10 years ago as he rubbishes claims of a connection between the two. According to Killer, who drew for a syllogism that the crime has been a challenge for Jamaica from the 1970s when Bob Marley was shot, denounced the ongoing claims to pin the blame on dancehall music as he reminded Winford Williams about crime in the island being historically rooted in political strife.

“How did the great legendary Bob Marley got shot in the mid 70s,” Bounty Killer asked in a post to his almost 1 million followers, “Was it bcuz of musical or political influence on the ppl???”

His post was accompanied by a video of an interview done in 2009 on On Stage, which shared him asking Winford Williams several rhetorical questions about horrible crimes that have been happening since the early days of post-independence.

He added that it is a “combination of things” that is responsible for crime which includes guns, drugs, illiteracy, unemployment and poverty —was to be blamed for the country’s greatest social dilemma. He said the terrible state of affairs is further compounded by the “selfsh people dem weh rich an nuh give weh nuttn an nuh help nobody.”

He noted a man like himself has been able to do much, and if others wanted to, they could have done much more.

“Picture if you did have all ten more Bounty bout yah weh like bring people an help people an drag up people outta di trash.. How much more yutes woulda get help inna dancehall?” the ‘Poor People Governor’ said.

The direct reference to Bob Marley is one that is often mentioned as there was an assassination attempt on the life of Marley on December 3, 1976, when gunmen attacked his home while he and members of his band, including his wife Rita Marley, were rehearsing for one of his first major public shows on home soil. The attack left Bob Marley wounded with a bullet to his upper left arm and Rita Marley narrowly escaping a bullet to the head as her tough dreadlocks blocked the bullet from penetrating her skull.

During his lifetime, Marley was a staunch critic of politics and politicians, and his music was often used to “bun out Babylon,” which was viewed as an oppressor of the people. While he was endeared to ordinary people, there were many more still who were threatened by his influence as well as his music which became powerfully influential around the world. The attempt on his life has been speculated to be an attempt to silence Marley’s voice as the poor gravitated to his music and messages.

In particular, the events leading up to the days have linked Marley’s shooting to the 1976 elections, which were called by the PNP and shifted to the day of Marley’s concert, which was scheduled for December 5, 1976. That election was by far one of the bloodiest in Jamaican history, and many historians of the day have linked the political events of the day and Marley’s shooting to political forces who were desperate to silence Marley. There was a feeling that Marley’s concert might have swayed the electorate away from the then governing People’s National Party, PNP.

It seems the latest push back by those in the dancehall fraternity is to ensure that the historical connection to crime in Jamaica is not miswritten going forward for the current generation. Bounty Killer has constantly been speaking on the effects of poverty and inner-city life even as he tried to make a difference with his “Bounty Foundation,” which has undertaken massive charity work to assist the poor and needy. According to him, social dysfunction enables violence to thrive as a culture in Jamaica, which is why he believes in empowering people to get out of those situations with his Foundation.

Meanwhile, many artists echoed the sentiments of the “Sufferer” deejay as they debated the contributions and effect of crime on the island.

Among those who responded is Baby Cham, who said, “tell them General…”

However, while many of the Bounty’s followers commented their agreement with his statements, others took a different view. 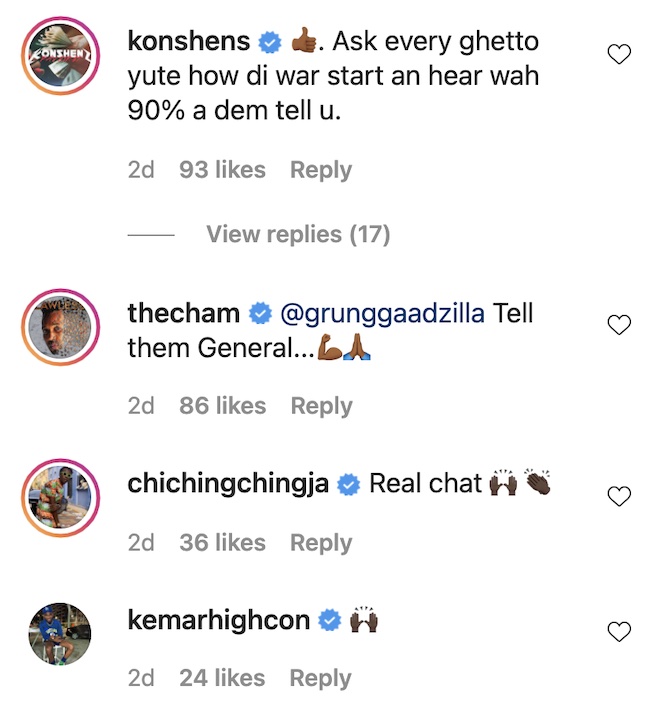 One person comment, “…I can’t fully agree with what you saying I born and grow a ghetto like most people and if we say music no play role or influence in crime and violence we are being hypocrites and sick liers [sic] and a big part of the problem as you say its multiple things and to be honest music and the influence of artists is in that mix. Long gone are the days people kill over politics, that’s a thing of the 70s,80, 90s.”

The commenter added, “in the last 10 years look at the amount of artist who have been charged with gun related crimes it’s unheard of because back in the days artist sing not get in gun business.”

Among those involved in crimes in one way or the other and charged and sentenced to serve jail time are Buju Banton, Vybz Kartel, Ninja Man, Tommy Lee Sparta, Rytikal, Xklusive, Laden are just a few.